Friends of the Crèche is a national American and Canadian club for people interested in nativities. It has had biennial conventions since 2001. Santa Fe will be the location of the next biennial convention this November. We invite you to attend!

New Mexico is called the “Land of Enchantment” because it is so different and special. Our biennial convention in Santa Fe this year is called “Land of Enchanting Nativities”. We will meet at La Fonda, a famous historic hotel right on the plaza of Santa Fe. This hotel has an amazing art collection throughout the hotel and inside each guest room. There are free tours of this art, guided by docents. Just ask the concierge in the lobby.

The focus of our convention will be on the nativities of the American Southwest. On the mezzanine of La Fonda will be a special exhibit of fine southwest nativities, borrowed from many collectors, and displayed inside locked cases. Some of the artists who made these nativities are no longer alive. 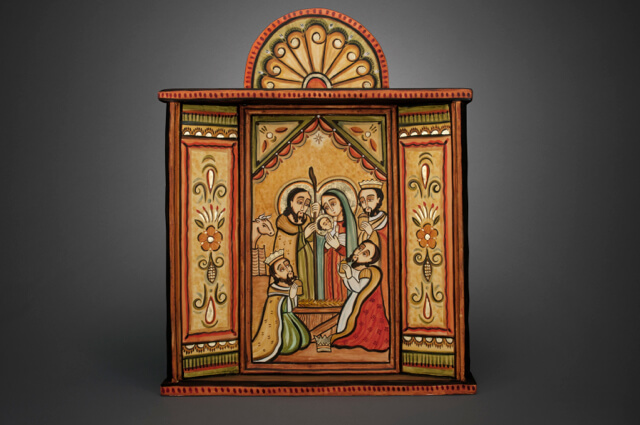 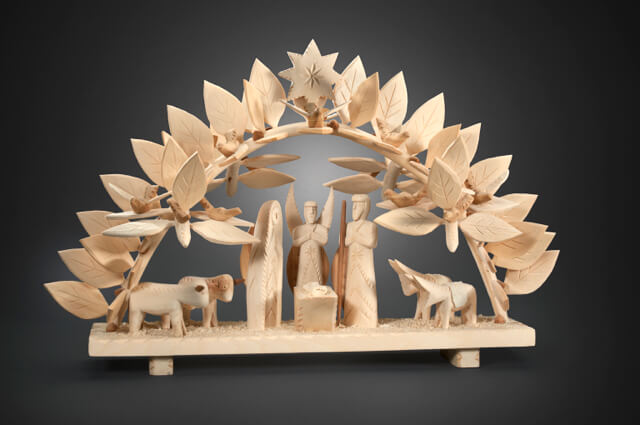 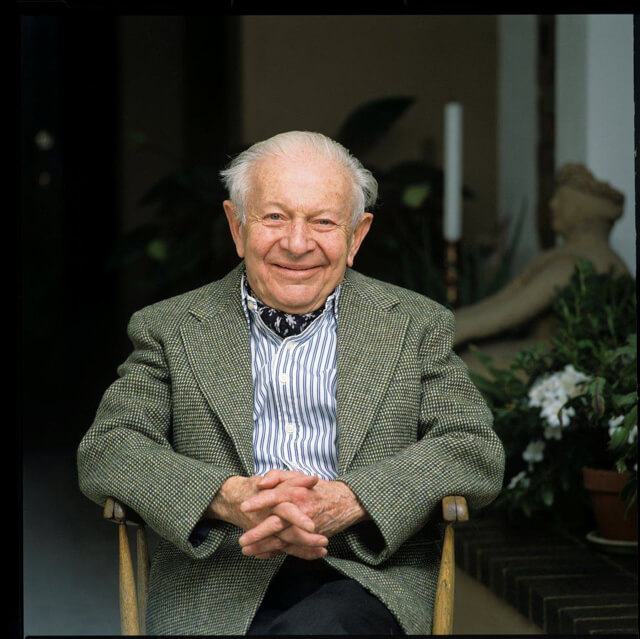 We will begin on Friday, November 8th, with an evening reception at the Museum of International Folk Art on “Museum Hill”. The Girard Wing of that museum has many nativities on display, because Alexander Girard loved and collected nativities. He essentially created the entire field of southwest nativities when he asked Sallie Wagner to encourage her Indian friends to make nativities. Girard will be given a posthumous award for his splendid and long lasting contribution. When you view the Girard wing, you will be asked to find as many nativities as possible. There will also be live music and food to nibble. There will be several southwest nativities from the museum’s collection on display in Lloyd’s Treasure Chest, which is at a lower level, accessible by an elevator. If you are still hungry after the reception, you might like to have dinner at one of Santa Fe’s many good restaurants. A list of restaurants will be given to you, with choices ranging from affordable to fine dining.

The formal opening of the convention will be on Saturday morning at La Fonda’s ballroom. The mayor of Santa Fe will give a proclamation. Later that morning, another mayor, the mayor of Belen, New Mexico, will give a talk about defending the public nativity in his town. Belen is south of Albuquerque. Belen is Spanish for Bethlehem. 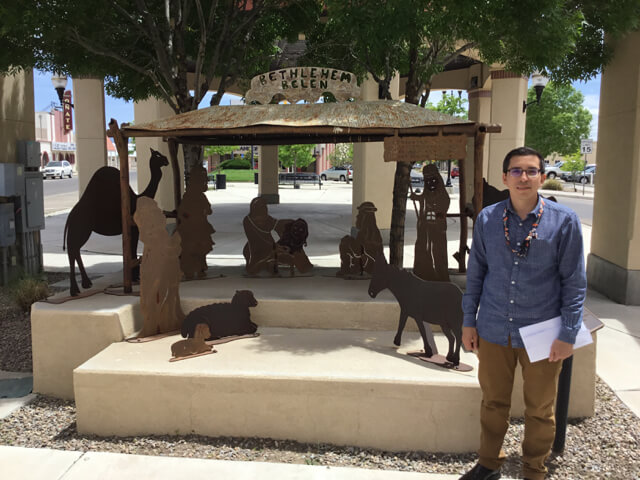 Susan Topp Weber will speak on the subject of Southwest nativities from the different cultures we have in New Mexico, such as Pueblo, Navajo, New Mexico Spanish, and Anglo. She is the author of an award-winning book on the subject. 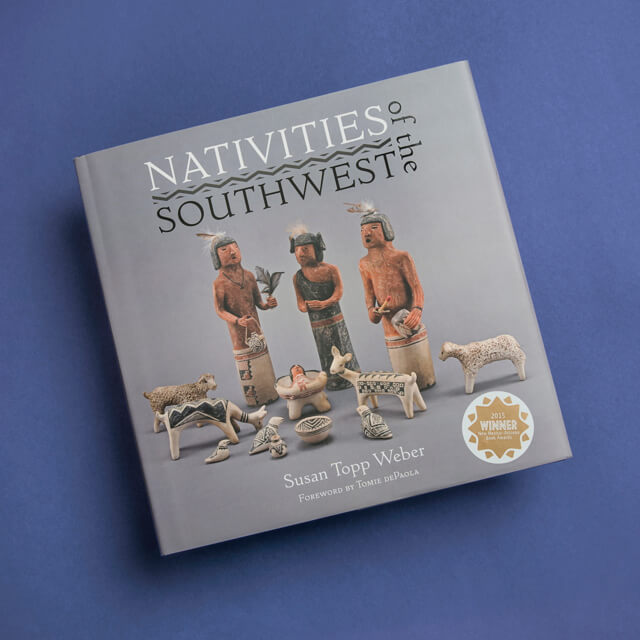 Christopher Toya from Jemez Pueblo will speak on the unique custom of “Bethlehem” at that village. This is a live indoor nativity consisting of a husband and wife who allow their pueblo home to become “Bethlehem” between Christmas Eve and Epiphany while they host the wooden baby from the village church. Chris will have photos of various different Jemez Pueblo versions of “Bethlehem”, from its beginnings to the present. Jemez is a pueblo where photography is not allowed, so it will be a rare privilege to see them. Chris Toya is the first person to research this subject. Don’t miss this talk! 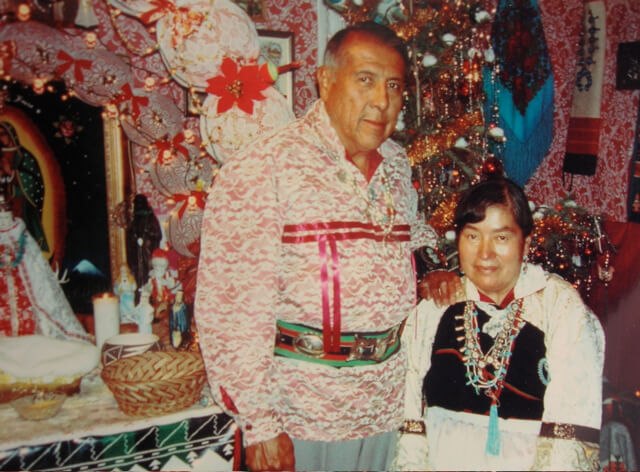 After lunch on Saturday, we will see a Spanish Colonial Christmas play called Los Pastores (The Shepherds). The amateur group of actors is from a catholic church in Belen, New Mexico. They own a rare surviving colonial script. The play has a musical aspect, and they sing and play music during the play. The script is in Spanish. Charlie Carrillo is a well-known Santa Fe maker of religious images. These makers are called santeros in New Mexico (but not in any other Spanish speaking country). He has personally taught most of the artists who sell at Spanish Market on the Santa Fe plaza in late July. Years ago, Charlie designed a New Mexico style nativity, which was reproduced for a few years, but is no longer available. It was very popular and those who own one feel very fortunate. 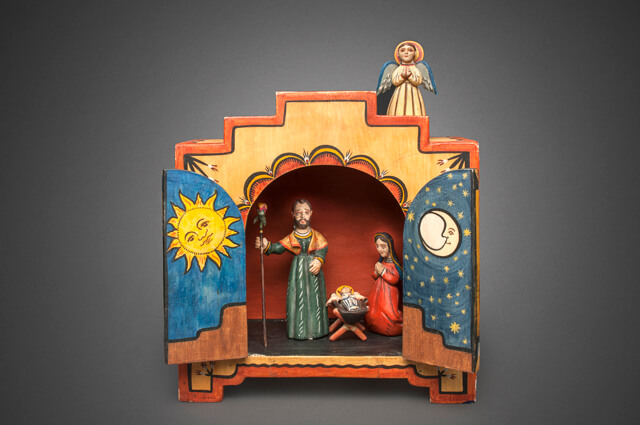 Charlie spoke at our convention in 2005 and he designed the logo for that convention. He will speak again at this convention.

Charlie survived a serious automobile accident two years ago and we are lucky he is still alive.

After his talk, we will enjoy New Mexico hot chocolate and Susan’s hand-formed biscochitos, the official state cookie of New Mexico. 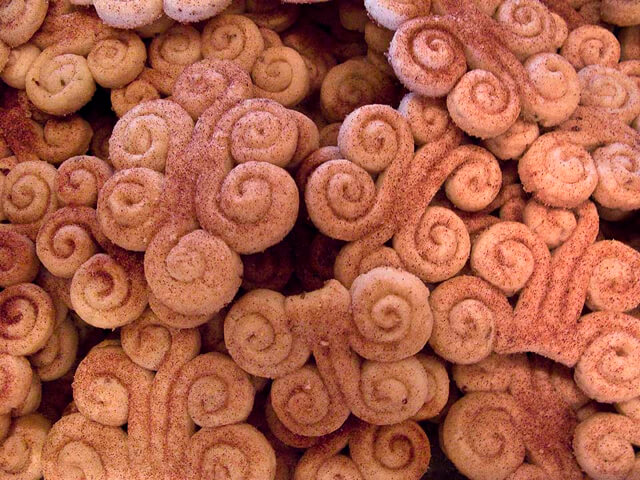 On Sunday morning, after the annual meeting of Friends of the Crèche, Kathy Chilton will speak on how to repair broken nativities. She spoke to us in 2005. Her talk is titled, “Oops, I Just Dropped My Best Nativity. Now What Do I Do?”

Sunday afternoon, there will be demonstrations in La Terazza at La Fonda by New Mexico Spanish artists in a variety of techniques, such as wheat straw applique, woodcarving, painting, or a colonial embroidery stitch called colcha. You will be able to watch, ask questions, and buy directly from the artists. The various markets and exhibits will be open till 3:30.
There will be a service available for packing and shipping any treasures you purchase. 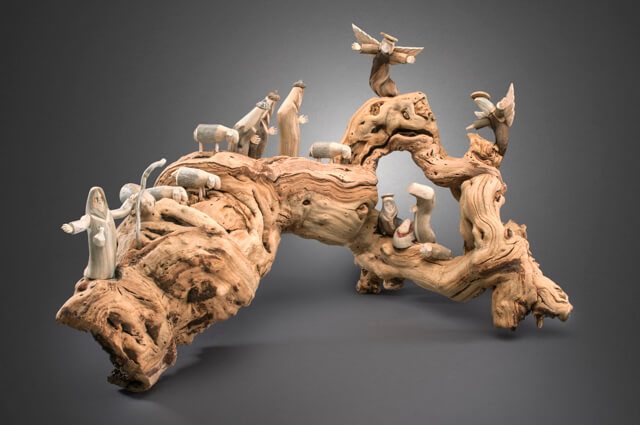 Also on Sunday afternoon, Susan Weber will give briefings to those planning to go to Jemez Pueblo Feast Day on Tuesday, November 12th. If you have paid to be on one of our rented buses, you will be fed in a pueblo home. Alternatively, you can rent a car and drive to Jemez Pueblo. It is a public event.

Sunday evening, we can meet at La Terazza, the lovely hall with dramatic second floor views of the Cathedral Basilica of Saint Francis of Assisi. We will enjoy fellowship and drinks with new and old friends prior to the formal banquet in the ballroom that ends the biennial convention in Santa Fe.

On Monday, some of our attendees may be exploring Santa Fe and Taos or Los Alamos and Bandelier or Abiquiu and Ghost Ranch. Others will be going on a tour of homes with fine nativity collections, a sold out event. Some attendees will be going to Jemez Feast Day on Tuesday, November 12th.

If you have not yet registered for Land of Enchanting Nativities, but are interested, please do not delay, as it is likely to sell out. If you have never been to Santa Fe, come and discover this international destination in the Land of Enchantment! 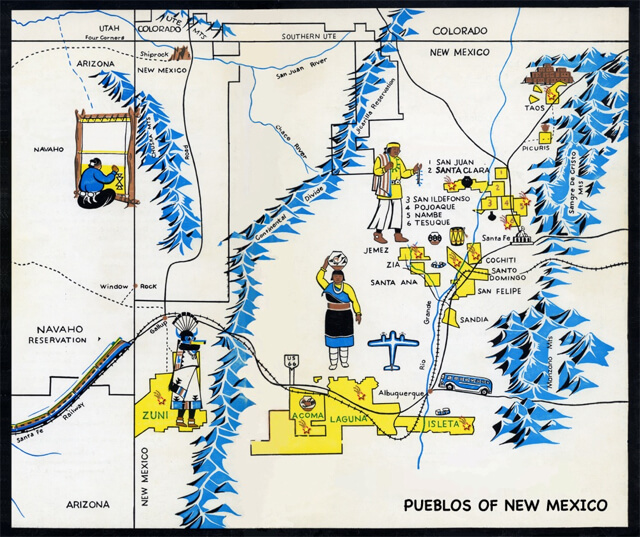