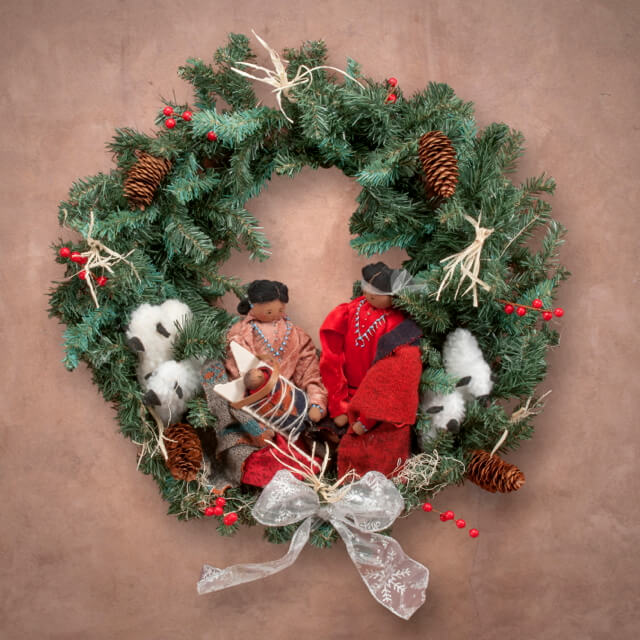 Sylvia Begaye is a talented Navajo artist from Fort Defiance, Arizona. She makes small fabric doll ornaments that represent the Navajo styles of dress, hair, and jewelry. Sometimes wooden cradleboards hold their babies. The ones with cradleboards are called “Madonna and Child“. Those with gray hair are called “Grandmothers“.

Sylvia’s faces always look like Navajo faces. Her delicate piped-on jewelry looks like the real silver and turquoise jewelry the Navajo jewelers make to sell and wear themselves. These ornaments have been sold for many years at Susan’s Christmas Shop, as well as Sylvia’s wreaths, velvet angels, and Navajo-style Santa ornaments. 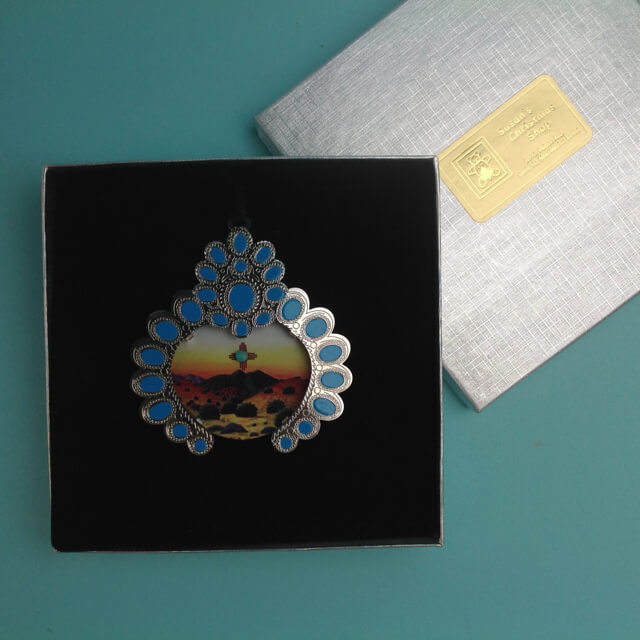 This special ornament is from a series of collectible ornaments created by the New Mexico Governor’s Mansion Foundation. It features the high desert landscape of New Mexico, with a Zia symbol in the sky at the time of a sunset. Squash Blossom necklaces made of silver and turquoise are now called New Mexico’s State Necklace. 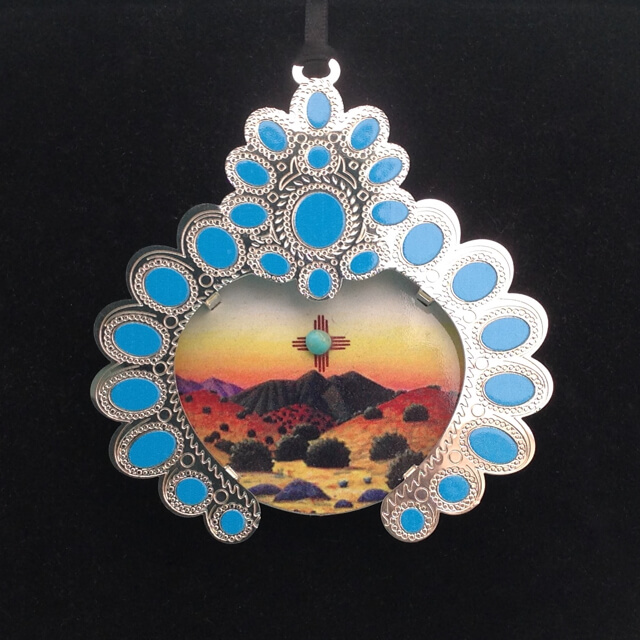 The ornament uses the pendant of this type of jewelry, not in real sterling silver and genuine turquoise stones, but imitation Rhodium plated metal and turquoise colored paint. All proceeds from the ornament sales benefit the Governor’s Mansion Foundation, a non-partisan, non-profit organization of volunteers responsible for the design and preservation of the Governor’s residence.

This ornament is now out of stock. 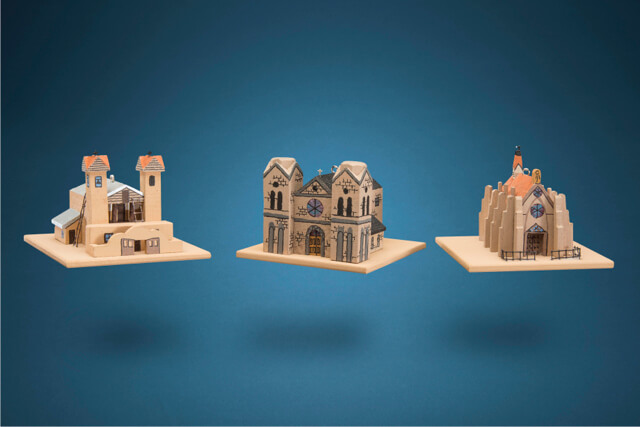 Carolyn Johnson has been making detailed small models of southwest churches since 1981. These models have just become better and more detailed as the years passed. Carolyn now makes over fifty different churches and continues to make new ones from time to time. Her church models can hang as a Christmas ornament or they can sit on a shelf. Carolyn began selling her work to Susan’s Christmas Shop in 1991. There are two wooden shelves on the south adobe wall of my shop, by the front door. Each shelf has dozens of small square openings, each opening the right size to hold a church model. On the bottom of each church model is a paper with information about that church. Most of the churches are located in New Mexico, but a few are in what is now Texas. The most popular church models are the ones shown here: the Cathedral Basilica of Saint Francis of Assisi in Santa Fe, the Loretto Chapel in Santa Fe, and the Santuario de Chimayo, a beloved pilgrim’s destination on the High Road to Taos.

A typical church model is two inches tall. Find them all here!

Santo Domingo is south of Santa Fe, about half way to Albuquerque on the Rio Grande. Recently, the council of Santo Domingo Pueblo announced that the official name for the pueblo is now Kewa. In practice, most people continue to call this pueblo by the name of its saint, Santo Domingo. Santo Domingo is known for pottery and jewelry, especially the drilled shell beads known as heishi and mosaic on shell. This large pueblo is also famous for its spectacular dances on its long plaza with hundreds of dancers of all ages. The impressive annual feast day of Santo Domingo is August 4th.

Most Santo Domingo Pueblo people are usually prohibited from making pottery figures, but Angel Bailon is permitted to make them because she was not born at the pueblo. Angel was born at Jemez Pueblo. She did marry a Santo Domingo Pueblo man and moved to his village. Angel has made charming nativities for years, but her son recently suggested she make a Flight into Egypt. Here Joseph, with his wooden staff, guides the donkey carrying Mary and her baby on their way to safety in Egypt. The painted designs on the hand formed pottery figures are traditional Santo Domingo pottery designs. 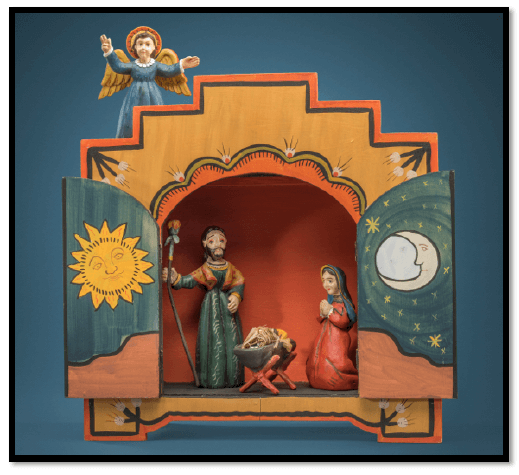 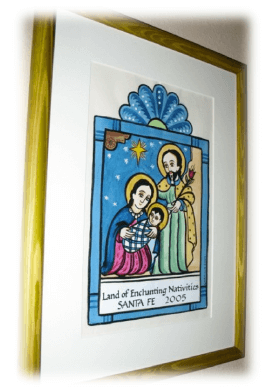 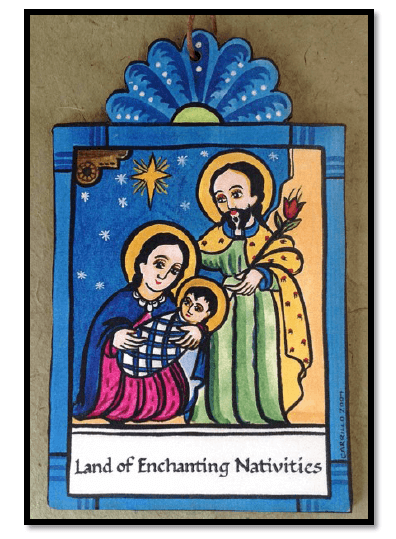 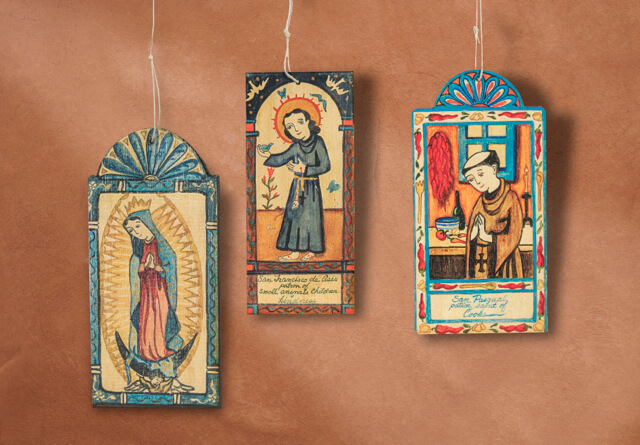 Lynn Garlick lives in Taos, New Mexico. She paints religious images in the regional style of New Mexico retablos, or a flat representation of a saint. She prints these images and she glues them onto lightweight wood in several sizes. Her retablos can be used as Christmas ornaments or be hung on a wall. More specific information about each saint is wood burned on the back of the retablo. Susan’s Christmas Shop has sold these for many years, beginning in the 1980s. Among the most popular retablos are St. Francis of Assisi, the patron saint of Santa Fe; Our Lady of Guadalupe; and San Pasqual, the patron saint of the cooks.

Check all her retablos here!